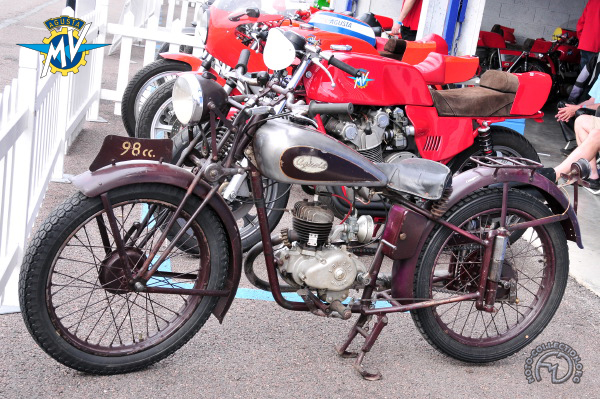 This modest utility lightweight was the ancestor of some of the most successful racing bikes. It was the original two-wheeler produced. by Construzioni Aeronautichi Giovanni Agusta, a pioneering Italian aviation company that built its first airplane in 1907.

The company had grown exponentially during the WWII and - similar to other Italian aircraft factories - had afterward turned to the design of a utility lightweight motorcycle in response to the county's urgent need for low-cost transportation.

The first plans had been drawn as early as 1943, but the Germans took over the plant and work didn't begin again untill944 in the face of a crippling shortage of materials. The MV Agusta company (Meccanica Verghera) was created in 1945. The very first MV was a 98cc two-stroke with girder forks. It was called "Vespa" ("Wasp") but at the 11th hour, MV was forced to drop the name, which had already been registered by Piaggio, another aircraft factory turning to two-wheelers. So itwas under the unexciting designation of "MV 98" that the new model was launched in mid- 1946, as an economic two speeder with no rear suspension or as a "Turismo" with plunger rear suspension and three speeds. In the postwar recovery, races were organized gradually, and the MV 98 won the marque's first victory in a reliability trial at La Spezia. Urged on by Count Domenico Agusta, head of the new company, a racing version appeared and the glory days dawned.

The MV 98 gained telescopic forks in 1947- plus an airplane mascot on the front mudguard in honor of its origins in aircraft manufacture.