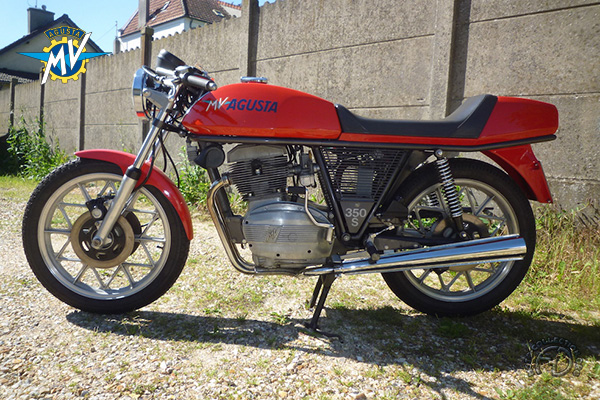 Product of an auto stylist

At the start of the 1970s, the motorcycle market regained its old vigor. MV Agusta, crowned with more than ten years' success in Grand Prix racing, was anxious to capitalize on its image. Its 750 was too costly to build and only attracted a tiny minority of rich amateurs. MV attempted to attack the middleweight market but the works had to be content with a great styling exercise.

New Wine in an Old Bottle

The "Bicilindrica" was born in 1966 with 250cc engine and transformed later into a 350 with rounded contours. It was poorly positioned to attract the youth market, except for Italy, where the borders were still closed to Japanese bikes. Redesigning the Bicilindrica was entrusted to one of Italy's foremost automobile stylists, Giorgio Giugiaro. Sadly, the innovative shape of his "Ipotesi" ("Hypothesis") didn't win over a public shocked by its modern look.

Giugiaro retained only the bottom end of the engine, and the end covers and cylinders were given an angular treatment. The new frame, still a simple open cradle, had a horizontal upper tube forming a belt line for the motorcycle from the steering head to behind the saddle. This horizontal strip was underlined by triangular side-grille panels composed of parallel strakes. Light and elegant fittings completed the picture. The Ipotesi was endowed with three disc brakes and electronic ignition. Its engine had also been rejuvenated and developed 34 hp at 500 rpm compared with the 28 hp of its previous incarnation.

The Giugiaro-Ipotesi was one of the few motorcycles created by a major automotive designer.