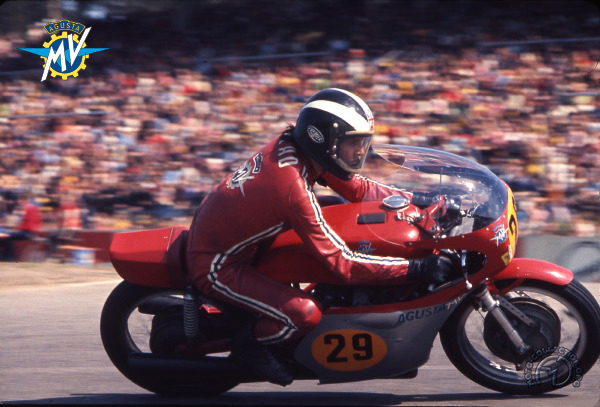 The swansong of the MV four

Between 1952 and 1966, MV competed in the World 500cc Championships with a four cylinderthat won many races. Then the Japanese machines became too great a threat, and MV developed a 500cc three-cylinder outof the 350cc racer. In 1973, this engine had in turn become outclassed by the competition and the Italian engineers developed a new four-cylinder power unit. MV started with a reduced-capacity engine (433cc) in order to work up to the permitted limit in due course.

The career of this motorcycle was unquestionably the most painful of all the racing MVs. In an effort to make it competitive, the factory was continually modifying the frame and engine (which had two different sets of bore and stroke measurements).

After trials of a cantilever rear suspension, it was sidelined in favor of lateral hydraulic dampers, while on the braking front, the machine initially used drums, then twin front discs and, later on, another disc at the rear; at the same time, light-alloy wheels were adopted. Despite everything, in 1973, Phil Read won the riders' and constructors' world championships with this machine. The next year. Read won the 500cc World

Championship; his teammate Bonera was runner-up. In 1976, the 500 gave MV its last Grand Prix victory, in the German GP at the NĂĽrburgring, before the curtain finally fell on MV's racing activities.

Phil Read on hisMV 500 during the 1973 German Grand Prix where he defeated the Yamaha 500 two-strokes.