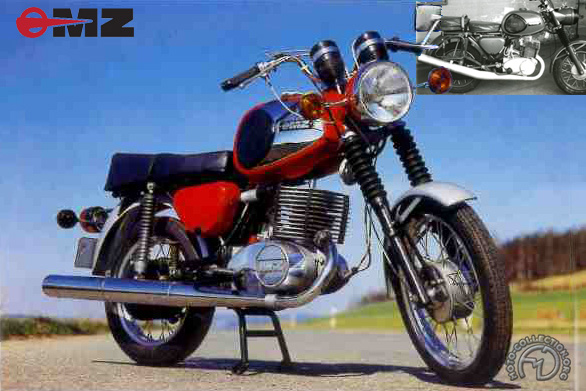 Now that all the Western marques have followed the lead of the Japanese towards sport and leisure bikes, only the Eastern European countries remain rooted in the utility market. With no great competition in this area, and thanks to highly competitive pricing, these ex-communist manufacturers have succeeded in holding on to their export markets. That is particularly so with the East German firm MZ, based at Zschopau in the old DKW factory.

The first version of the 250 MZ appeared in 1956; it was a modern design for its day with swinging arm rear suspension; it was more original than the 125 directly derived from the DKW. The new design, retained the basic qualities of the lead-in model: remarkable comfort and excellent reliability.

Obsolete from Day One

It was, on the other hand, already obsolete on the mechanical front, despite its new five-speed gearbox. The new design, with the very square-cut engine silhouette, could not conceal the fact that the rider still needed to mix oil with the fuel. Its principal originality lay in the engine mounting. It was bolted at the rear and fastened to the frame by a flexible mounting on top of the cylinder head. A comfortable touring bike, the 250 MZ attracted many adventure-loving riders who rode it to the four corners of the world. It was also available with a particularly well-conceived light sidecar. The 250 MZ is still marketed, though today it has separate lubrication and a front disk brake.

Only the deluxe version of the 250 MZ was exported.