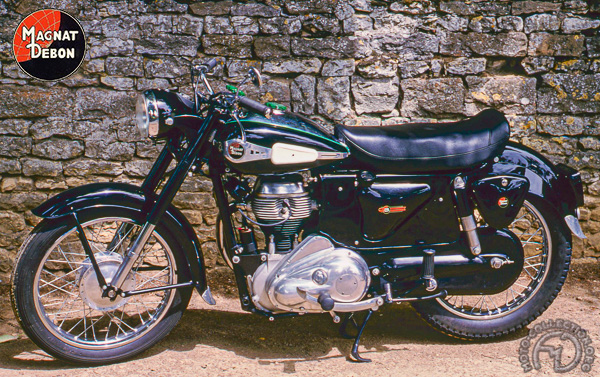 The Magnat-Debon C4SO and its Terrot badged sibling, the RGSO, were the culmination of a long line of overhead-valve 500s that went back to 1932. Sadly, the modernization of the cycle components, that finally bought the C4SO suspension up to date, came too late. It did not take place until the 1955 Paris Salon, by which time small cars like the Citroen 2CV and Renault 4CV had already replaced motorcycles in popularity. The craze for scooters, dominated by Vespa and Lambretta, had drained the finances of companies more used to furnishing dividends to their shareholders than investing in new model ranges.

At Last a Modem Frame

For the C4SO, Magnat abandoned the plunger-suspension frame used since 1948 in favor of the rear swing arm frame of the 250 OSSD, launched in 1954. With much greater suspension movement and double-acting dampers, it improved comfort greatly.

Died Due to Lack of Interest

The old offset brakes were replaced by centered drums and a dual seat was fitted. The new model went into the 1956 catalogue, but lacked adequate promotion, and the sales network had no fa ith in it Production was only two C4SO Magnats and seven RGSO Terrots. They were the last French-built 500s; thereafter Magnat-Debon-Terrot concentrated on their new 125/175cc range.

Though it was a machine perfectly in tune with the taste of its time, the 500cc Magnat-Debon was rejected by the marque's agents and proved to be the last French-built 500.