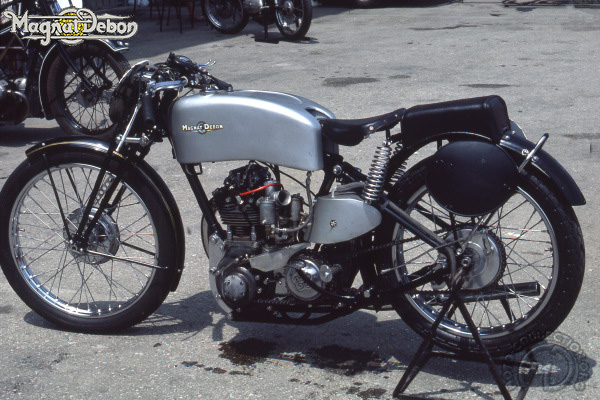 Based in Grenoble, Magnat-Debon was an early participant in motorcycle sport. As early as 1906, a Magnat-Debon won the grueling Mont-Ventoux hillclimb. During the 1920s, after the marque had combined with Terrot, Paul Boetsch kept on winning with Blackburne-engined machines. In 1932, Terrot announced that it would be selling client-competition machines. It was possible to buy these badged as Magnat-Debons.

At the same time, Magnat-Debon (whose Edelweiss badge celebrated its birthplace in the Alps) continued to race specially-built competition machines like the 350 BC, with Jacques Onda as official works rider.

Between the first "CP" racer of 1932 and the 1936 BCP illustrated, many components were changed. The gearbox, initially a Burman unit, had become an own-make item. The aluminum crankcase and two-bearing crank were replaced by a magnesium crankcase and a crank whose stroke had been reduced by 10 cm and which now ran in four rollerbearings. The shorter cylinder was deeply recessed into the crankcase and was crowned by a re-engineered cylinder head. Finally, the adoption of stunning tanks altered the look of post-1936 racing Magnats. With superb road handling, the BCP had one of the finest gearboxes of its day. It was lightweight and powerful in braking, and its sole drawback was its tendency to run big-ends at high speeds. That meant it was best on winding tracks like Mont Ventoux, where Jacques Onda won in 1936.

The stunning elegance of the "four-bearing" Magnat-Debon BCP makes it one of the finest French racing bikes and a world-class classic.