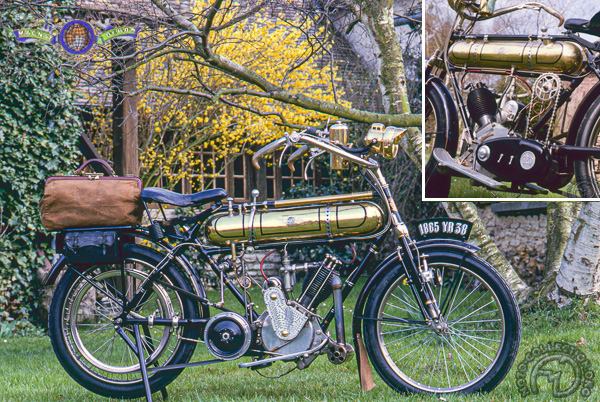 Though they had been working together since 1893, Jules Magnat and Louis Debon only built bicycles- apart from a few prototype lightweight motorcycles - until 1906.

For Magnat-Debon's first production motorbike, the company enlisted the services of Arthur Moser. It was a 331cc (70x86mm) 2.5 hp model with an automatic intake valve.

A Bike for the Air Force

In 1910, this engine was fitted with overheadvalves, a rare feature at that time. The engine rose first to 384, then 397cc in 1912. This bike was the mainstay of the marque until the 1913 arrival of an ohv 500cc V-twin. But times were hard for Magnat-Debon, then called "Magnat & Moser, Manufacturers." The French Air Force used the 400 during WWI (hence the name "Aviation"), and MagnatDebon designed a V-twin with rear suspension, of which the military authorities ordered 1000 units. Unfortunately, it was not ready when the Armistice was signed, and Moser killed himself in a fit of depression. In 1920, the Magnat-Debon company, owned since 1914 by Moser and Villard, was acquired by the "Cycle and Sewing Machine Construction Company of Lyon." in the confusion, the little 3.5 hp had a hard time evolving. With its "elastic fork" (the ancestor of telescopics), its ohv motor, its transmission and its crank handle starter, this bike wasn't lacking in assets even though it still had belt final drive, and the brakes only acted on the rear belt rim.

The Type Aviation was a modern little bike with old-fashioned styling and transmission. In 1923, it was updated with a more modern tank design and a kick-starter.