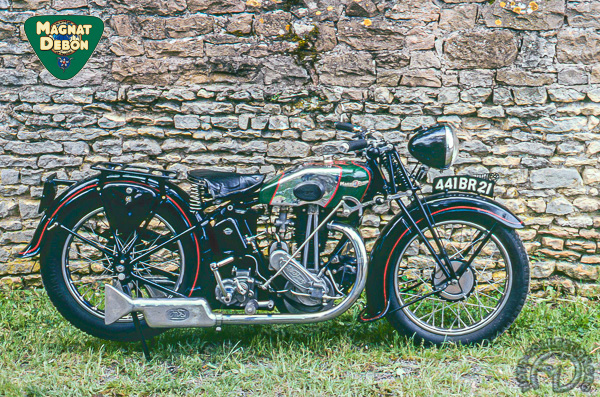 Magnat-Debon was an independent manufacturer until it joined forces with Terrot in 1924. The first fruits of this pairing were the 175 and 250cc two- troke 1925 models. On the fourstroke front, Magnat continued building MAG engined machines until 1926. But in 1927, standardization produced a side-valve 350 that was identical to the contemporary Terrots, right down to the shape of the fuel tank.

The distinctive identity of Magnat-Debon was preserved by an overhead-valve 350 with a Blackburne engine. And this identity was maintained until 1932.

In 1927- and, especially, 1928- the 350 Magnat-Debon-Blackburnes, with flat-tanks and engines with external flywheels, could hardly be called modern motorcycles. The new look came in 1929, with a superb squat and angular saddle-tank, engines with internal flywheels and more heavily-finned cylinders. The silhouette became very modern, particularly in the BOSS2 "Racing" and BOSS2C "Supersport Comfort" twin exhaust pipe versions. In 1930, the fitting of a Blackbume engine wid1 enclosed ohv gear prompted the change of designation to BOSSC2. That was the final modification. The powerful and reliable ohv Blackbume 350, coupled to therobust Terrot three-speed close-ratio box,

running on an equal mixture of gasoline and benzol, it was capable of a genuine 75 mph.

Fast and reliable, the superbly finisbed MagnatDebon BOSSC2 of 1930 bad every modem feature - except dry-sump lubrication.