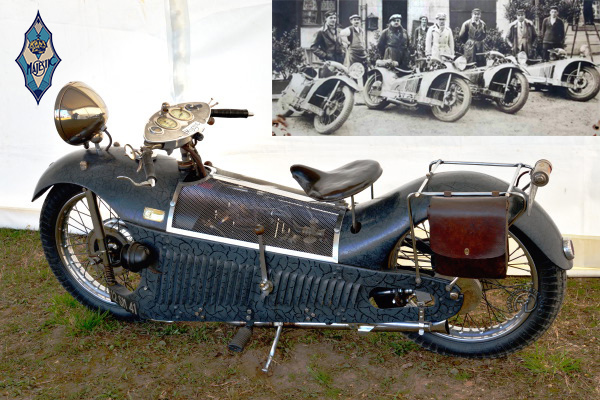 Anticipating the end of the front fork

The telescopic fork seems to have reached its limits of development nowadays. and many manufacturers were experimenting in the 80Ā’s and 90Ā’s with new forms of front suspension on machines like the Elf, Bimota Tesi and Yamaha Morpho. But over 60 years ago, the Majestic showed that the technology already existed to do away with the steering fork.

The story of the Majestic began in Paris in 1928, where a certain Monsieur Roy - already noted for his "New Motorcycle," which had a pressed sreel frame Ā– proposed a more stable design of two-wheeler. Casting convention to the winds, Roy fixed his engine between the two side-members of a rigid chassis which joined the front and rear axles.

The front axle was telescopically spring, but did not turn from side to side. Jnstead, hubcenter steering was controlled by a drag link and steering knuckle. The power unit was completely concealed beneath a sheer metal hood and to maintain a low silhouette, the fuel tank was built into the front mudguard ahead of the handlebars. It was a daring concept, and though the Majestic never went into serious production, it was available over a five-year period. Various power units were fitted - Chaise singles of 350 and 500cc, JAP V-twins, Cleveland and Chaise four-cylinder engines. Majesties enjoyed some sporting success in rallies like the Paris-Pyrenees-Paris marathon.

Monsieur Roy, builder of the Majestic, in 1930 on his personal machine equiped with an american 1000 cc four cylinder Cleveland.