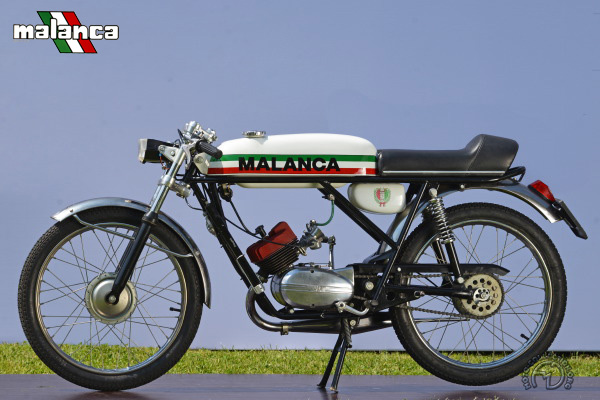 The late 1950s was marked, on the Italian motorcycle scene, by the spread of sporty 50cc machines. It was a phenomenon comparable to that of the scooter a decade earlier. Which ran out of steam once the fashion had faded.

Competition became so fie rce that export became the main issue for many marques, even the small ones. In France, where the scooter, autocycle and motorcycle were all on their last legs, there were only utility powered bicycles. The field was wide open for the sporty Italian mopeds, which had reached the point where they satisfied the youth market that had fallen head-over-heels for this newcomer.

In 1958, Mario Malanca founded his firm, near Bologna Ā– the base of engine manufacturer Franco Morini. He, like his rival Minarelli, provided the tiny power units whose easy availability had fueled the growth of this market. In the late 1960s, the Malanca moped range had about 20 models, including the Malanchino utility model, with an open backbone frame, the 3M and 34MP, which could be ridden without a license, the 4M Country off-road mount and the sporty Testa Rossa, with four or five speeds. The 34MP was fitted with pedaling gear so that it legally classed as a moped. Though this was hardly in keeping with its general appeal, which was that of a lightweight motorcycle, with its long 2.7 gallon fuel tank, its dual seat, its dropped handlebars and its gear selector pedal. However, in 1983, Malanca ceased trading after having also built some 125s.

With a light, robust frame, attractive styling and good road-holding, the Malanca 34MP was only fitted with pedaling gear to comply with the law.