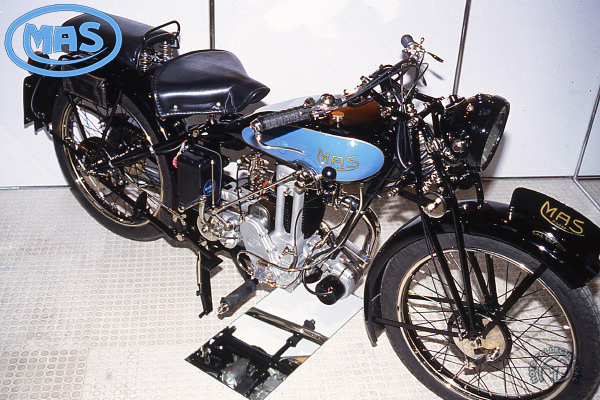 An outstanding marque from Milan

Italy has a natural affinity for fine engineering and a myriad of tiny marques flourished during the 1920s. All offered highly technologically developed machines Â– mostly in the lower-capacity classes, with overhead-valves and a clear preference for unit-construction. An exception to this almost universal rule was MAS, a little company from Milan that based its name on "Motocicli Alberico Seiling," the name of its engineer-designer.

The letters MAS also inspired the company's Latin tag: "Memento audere semper" ("Always remember to be bold"). The Milanese marque flourished from 1922 to 1956. Its first model was a 125cc four-stroke with two speeds and overhead-valves. At the end of 1925, MAS eclipsed this model with an ohv 175cc, noteworthy for the rare feature of a cast-aluminum cylinder. With a three-speed gearbox, it could reach 40 mph.

The little marque moved into bigger displacements with the launch of a 250 in 1928 and a side-valve 500 vertical twin in 1929. Nevertheless, the 175 remained the marque's flagship model, and was updated in 1929 with a facelift and some modifications. In 1931, MAS adopted a two-stroke engine for its 175 (transformed into 218cc during 1934) and launched its first Â– and very handsome Â– 350cc model, with overhead-valves and a slightly inclined cylinder. This was followed in 1934 by a 500. Seiling left the company in 1938, but production remained much the same until 1947, except that swing arm rear suspension became available as an option after his departure.

Surprisingly, the MAS 175 even took pan in competitions like the Paris-Pyrenées-Paris and Paris-Nice trials and the Paris-Roubaix event.