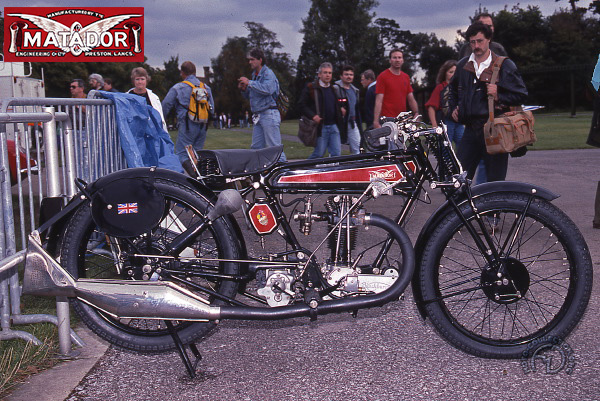 The town of Preston in Lancashire is a long way from sunny Spain, yet Bert Houlding named his two marques, founded in 1922 and 1924, "Matador" and "Toreador." They were built in the same factory and powered by Blackburne, JAP, Bradshaw or MAG engines.

Sales of the Blackburne-engined models took off after Stanley Woods won the 1923 Isle of Man Junior TT on a 350 Cotton-Blackburne.

Blackburne engines Â– developed before WWI by Cecil and Alick Burney from a design by aviation pioneer Geoffrey De Havilland Â– were ohv long-stroke singles with a small but robust crankcase. The Burneys dropped out after WWI, and the firm was taken over by Gillett Stephens (who marketed US Liberty airplane engines in Great Britain). Works foreman was veteran TT rider Jack Holroyd, and the designer was the famed Ike Hatch, who designed the postwar ohv 350cc engine. The robust and powerful engine used by Matador in 1924 was related to Woods's TT-winning power unit. Matador matched this with twin drum brakes, an advanced touch for the period. Sadly, instead of sticking to this winning formula, Bert Houlding Â– who had successfully used the side-valve, oil-cooled Bradshaw 350cc engine since 1923 Â– entrusted the erratic Granville Bradshaw with the design of a new power unit for Toreador. The result was a unique oil-cooled 350 with chain-driven twin overhead-cams, which proved such a costly exercise that Matador and Toreador were forced to quit the arena in 1927.

This superbly-restored 1924 Matador is powered by a Blackburne engine; the marque also used the ohv Bradshaw "oil-boiler"