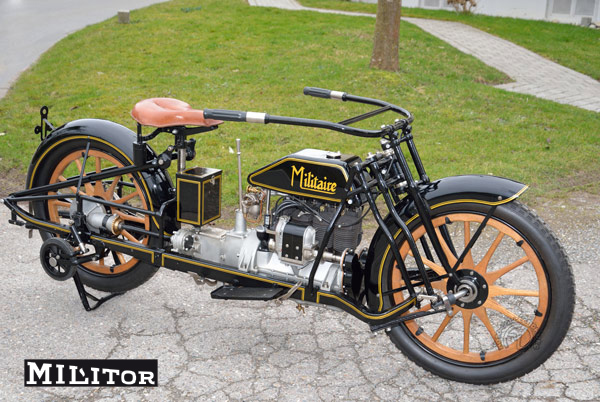 The bike that wanted to be an automobile

This unorthodox four-cylinder machine was only in production for a short time, yet it appeared under four different names from several distinct factory sites. The one common factor was the irrepressible N.R. Sinclair.

Sinclair's first model, built in Cleveland in 1911, was the "Patent Underslung" 480cc single-cylinder Militaire with friction drive. He soon switched to the four-cylinder design that the marque is remembered for. In 1914, he shuffled off to a new factory in Buffalo. Between 1911 and 1913, the Militaire four was license-built in St. Louis as the "Champion."

Unorthodox at All Costs

In 1917, the name "Militor" was adopted when Sinclair moved his troubled company to Jersey City. The final, 1922, machines (in Bridgeport, Conn.) were known as "Sinclair-Militor." The Militaire four was nothing if not unorthodox. It had a car-type chassis, hub-center steering controlled by massive handlebars, wood-spoked artillery wheels, a three-speed and reverse gearbox and Ā– on the earliest models Ā– a steering-wheel and retractable stabilizer wheels. Militaires were intended for Army use, and Militaire sidecar outfits came to France in 1918. They proved too heavy and sank in the battlefield mud. In 1919, Sinclair modernized the design, adopting overhead-valves and rear suspension, and spoke of building 5000 units a year. But faulty design destroyed any possibility of large-scale production. Anyway, the Militaire was enormously expensive.

Technically, the Militaire was a very advanced machine for the times. But its unorthodoxy and questionable reliability were its downfall.