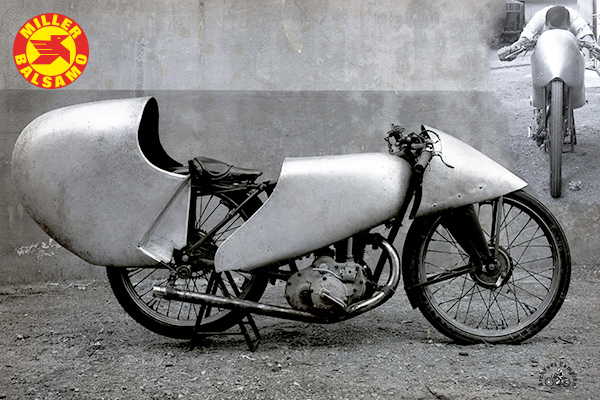 Off to a flying start

The three Balsamo brothers began building motorcycles in 1921. The marque took an origami bird as its logo and it became one of Italy's outstanding small manufacturers.

The first models were fitted with Swiss Moser 175cc engines. But in 1928, Miller produced its own power unit, a 175cc four-stroke designed by the engineer Cesare Cappa, best known for his work on the 1922 Fiat Grand Prix racing car. Good breeding shows: in October 1928, the new 175 set up a whole string of world speed records. This model was built successfully in touring, sport and racing versions, which had respective top speeds of 55, 65 and 75 mph, extraordinary performances for their day.

Four years later, Miller decided to return to record-breaking. This time, the 175 was fitted with a streamlined fairing, the result of aerodynamic research by Alessandro Marchetti, technical director of the Savoia Marchetti aircraft company, famed builders of flying boats. The results were stunning: the three-piece aluminum fairing designed by Marchetti weighed a mere 22 lb and the records fell like ninepins. Lying flat on the tank, rider Carlo Fumagalli garnered an impressive crop of records, among them 5 km at 87.83 mph, 10 km at 82.64 mph and 100 km at 75.81 mph. Besides its original175, Miller-Balsamo also fitted 350 and 500 English Rudge four-valve engines and 100cc Sachs units. Miller-Balsamo survived until 1959, when it disappeared like so many small Italian hand-crafted marques.

A real masterpiece in band-beaten aluminum, the three-piece fairing of the record-breaking MillerBalsamo was tailored to fit around its rider, laid down along the tank.