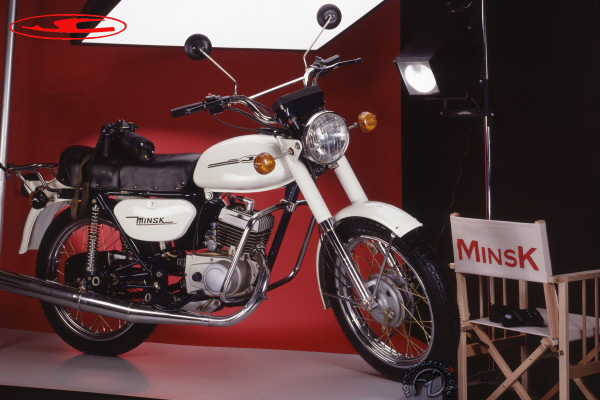 Last production from USSR and first one from Belarus

Until recently swamped by the bureaucracy of Soviet planned production, the motorcycle industry of the former Byelorussia specializes in single-cylinder two-strokes of 125cc. The MMVZ (Minsk Motorcycle Vélo Zavod) factory in Minsk was founded in November 1945, with the first motorcycles rolling off the line in 1951. This factory has built 20 million pedal cycles and 5 million motorcycles.

Currently, the factory still makes a model little changed from its original product. Output has officially risen during the Eighties to 200,000 motorcycles and 500,000 pedal cycles a year. Proudly bearing a stork, emblem of Byelorussia, on its fuel tank, the Minsk has certainly evolved less than the MZ which comes from the same origins. It does nowadays have electronic ignition, but remains definitely more obsolescent than its East German rival, if only by virtue of its gasoline/ oil lubrication.

Its main selling point is its extremely competitive pricing, a factor which is unlikely to remain valid for long as the ex-Soviet republics move towards a more liberal economy. It was formerly exported through a centralized state organization, but the factories of the former USSR have now signed accords with private importing companies.

The Minsk proudly carries a stylized stork: symbol of Byelorussia: on its tank. Its obsolescent design, however, is not really a matter for pride.