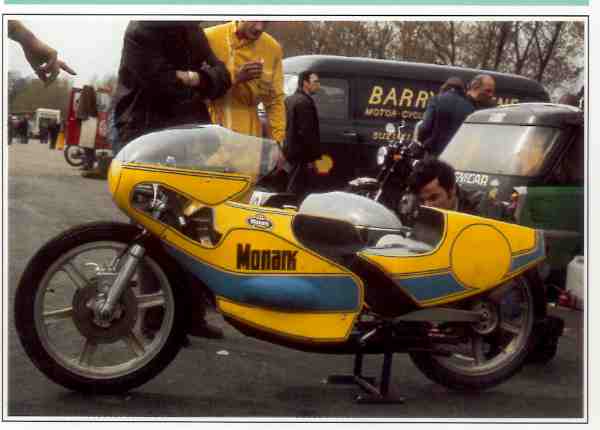 The start of the 70s marked a turning point in the development of world championships. The Japanese factories arrived in force; it was the last hurrah for the little builders and tuners. A few short years later, only the works machines remained.

Rudi Kurth was one of the cheery but cashstrapped rider-constructors who added so much ro the atmosphere of those old-time GPs. This sidecar champion, who lived on the circuits in his Citroen DS wagon, began work on a 500 in 1973. Inadequate preparation meant that it never finished in the money, but it remains one of the more interesting machines of its day.

The Monark company, best known in off-road competition, also took part in track racing. In 1972 it created, under the guidance of Billy Andersson, a racing 500 of classic design- apart from its engine. Derived from a boat engine, it was a compact Monark-Crescent three-cylinder two-stroke developing 75 hp. Kurth continued its development as a solo motorcycle power unit and built a 500 which, for size and style, looked more like a 50cc racer! It weighed less than 220 lb and its twisted shape was molded around its rider. Cooling is a critical problem for a marine engine, so the power unit - suspended below the frame - was cooled by three water pumps. The fitting of variable volume mufflers cut maximum power by some 6 hp compared with the marine version.

The astounding Monark-Crescent-powered racer of Rudi Kurth weighed as little as a 50cc machine.