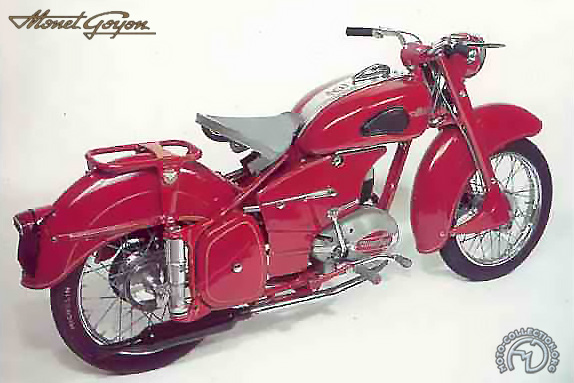 The postwar scene in France

Monet-Goyon faced the postwar period with an output consisting mainly of autocycles. A category that, like the 50cc motorized bicycle, had been defined by a decree issued by the occupying German forces on june 5, 1943. The autocycle developed out of the 98cc "bicycles with auxiliary engines" of the 1930s. The 1943 decree raised the maximum engine capacity for this tax class to 125cc.

Since 1923, Monet-Goyon had maintained technical links with Villiers of Wolverhampton, the highly respected British firm of two-stroke engine manufacturers. From1934 Villiers engines were license-built in France for the exclusive use of Monet-Goyon. Although, as the result of various business arrangements, by the 1950s Villiers-Monet-Goyon engines were also being fitted to Automoto, Peugeot and Terrot motorcycles.

ln the 1950s, the leading model produced by Monet-Goyon/Koehler-Escoffier was the conventional S6V autocycle powered by a Villiers-Monet-Goyon 100 engine. Initially. It had girder from forks, later replaced by telescopic forks, plus plunger rear

suspension. There was a three-speed transmission on the 1953 s6v and the 1958 S6VR, and a four-speed gearbox on the S6VL On higher-series models, the flywheel magneto that provided ignition and lighting current was augmented by an accumulator.

But there were few changes: the engineer J. A. Grégoire created a "variable flexibility" from fork for this final S6VR.

This ultimate version of the S6V Series Monet-Goyon modernized with 16 inches wheels, shows its age with its obsolete plunger rear suspension.