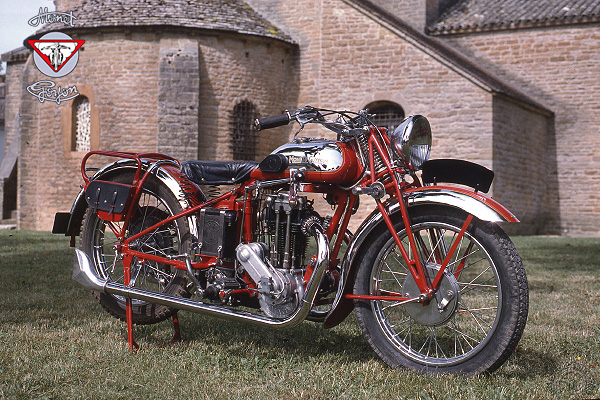 Monet-Goyon built itÂ’s first motorcycle in 1920 - a 117cc four-stroke with the obsolete feature of an automatic intake valve - but it found few buyers. Then the marque turned to two-strokes, and between 1922 and 1925 built lightweights powered by the excellent British Villiers engines. It was not until 1926 that it returned to four-strokes, using Swiss

Monet-Goyon remained faithful to the MAG until 1931, when it introduced the MG35, with a unit-constructed powertrain, built at MĂ˘con. A poor, unreliable performer, it forced the company to continue to list the reliable MAG-powered models, which were steadily updated as the years passed: Tank, brakes and gearbox were all revised.

In 1933, Monet continued its policy of fitting in-house power units by offering the MG 35

with a unit-constructed 250cc engine, though the flagship models were all still MAG powered. The launch of the new L-type engines did not occur until the end of the year. Monet's own gearboxes were notoriously weak, so the indestructible British Sturmey-Archer transmission equipped the powerful overhead-valve MAG-engined 350 and 500. ln this form, the 350 GA and 500 HA were virtually without fault and remained in production for several years more alongside the LS4 and LS5, which were entirely made

This stunningly restored 1933 Monet-Goyon was the last of the company's bikes to be powered by the classic Swiss-built MAG engine.