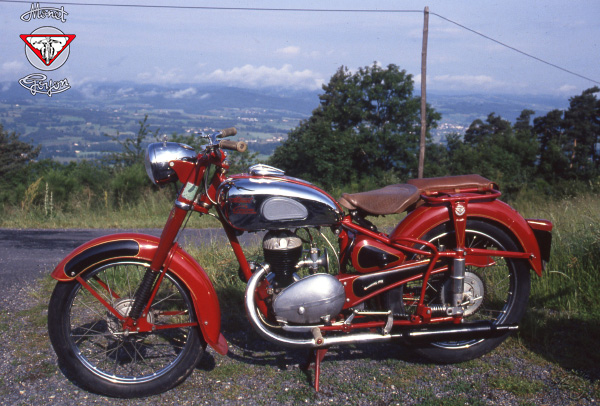 In 1950, Monet-Goyon had a pretty dismal range made up of 98cc and 125cc autocycles and 350 and 250cc four-stroke singles with girder front forks and rigid rear ends. The design of these warmed-over antiques dated from the 1930s, and had changed little.

After studying a 175 with an overhead-valve AMC four-stroke engine, the company opted for the 200cc Villiers two-stroke M2V "Shooting Star," launched in 1951 with a frame closely based on the existing 125cc S6V. The gearbox had three speeds. There was a skinny telescopic front fork and plunger rear suspension with Grégoire correctors.

The M2Vs "Sport Luxe" was launched at the 1952 Paris Show. Its curious displacement of 232cc had been obtained by increasing the bore size. It had a stronger telescopic fork and a four-speed transmission. The M2V became the M2VD "Tourisme Luxe" with the addition of the strengthened fork, though it had to wait until April 1953 before it got the four-speed transmission. There was also a motocross variant, the M2VC, plus a low-cost "Tourisme" three-speeder, whose electrical equipment was limited to a flywheel magneto. The M2VD was also sold by Automoto of Saint-Étienne and Motobloc of Vichy. Not particularly powerful, but light, lively and agile, the 200cc Monet managed to win sporting honors in the Paris-Nice and Saint-Étienne-Paris-Saint-Étienne Trials, and in the 1951 Bol d'Or, where Dauge managed to finish fifth in the 250 class, behind three Puchs and a jawa.

Known as the "Green Series," the 200cc Monet-Goyon was a good-looking lightweight; the more powerful 232cc version was the "Red Series."