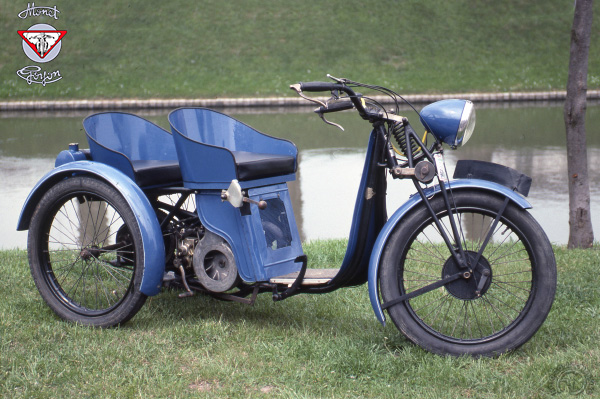 It's difficult to realize the vast human cost to France during WWI Â– which was largely fought across its territory. After the war, thousands of Frenchmen were left crippled in some way. To meet their special needs, Monet-Goyon specialized, between 1916 and 1939, in vehicles for the handicapped.

While WWI was still raging, they offered the Vélocimane and the Voiturette, the former being a manually-powered tricycle with a wicker seat and handcranks driving the single front wheel, the latter with either a 500cc Anzani single or a 750cc MAG V-twin.

The Vélocimane could be fitted with an auxiliary powered wheel driven by a little 120cc engine with an automatic intake valve, making a bizarre machine with its wheels set in diamond formation. It was one in a range of specially-adapted power and pedal two-, three- and four-wheeled devices offered by the company, bearing odd names like "VéloFauteuil" and "Pousse-Pousse Coloniaux." Machines were also built for the able-bodied. In 1921, Monet-Goyon brought out the "Auto-Mouche," a similar machine in which the powered wheel took the place of the right-hand rear wheel. But in 1924, the definitive version of the Auto-Mouche appeared, with an open frame like a scooter and powered by a turbine-cooled 147cc Villiers two-stroke fitted beneath the rider's seat and driving through a two-speed transmission. Later, the Auto-Mouche was available with two seats Â– first in wicker, then in pressed-steel Â– and powered by 175 or 250cc Villiers engines.

Only the French could have conceived such a bizarre machine, derived from an invalid carriage. Only one rear wheel was driven, to avoid fitting a differential!