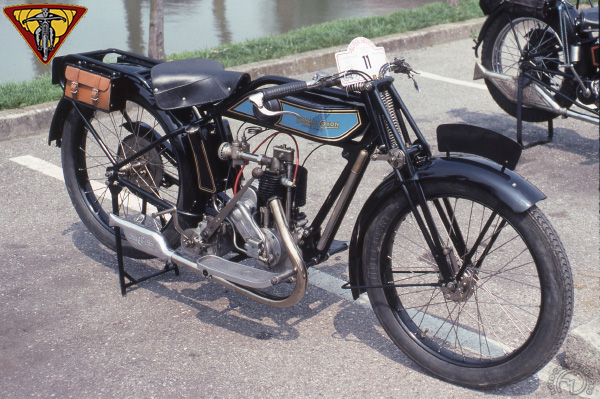 After beginning in 1917 with fairly unorthodox three-wheelers, the firm created by Joseph Monet (the brains), Andre Goyon Sr. (the financier) and Andre Goyon Jr. (the technician) turned, in 1923, to more conventional motorcycles powered by English Villiers 147, 175, 250 and 350cc two-stroke engines. But the two-stroke was far from being top dog in the 1920s, despite the brilliant results achieved by the 175cc Villiers, which was capable of over 60 mph.

In 1926, the Macon-based firm offered two 350cc bikes with four-stroke engines. As with the Villiers, these power units were imported; in this case, Swiss MAG engines made by Motosacoche in Geneva, well-built and bearing an excellent reputation.

The engine fitted to the MC "Super Touring" was the 1C14C F-head (overhead intake, side exhaust), while the second engine was the closely related overhead-valve MAG 1C14G, which powered the MCS "Super Sport." Both had British-made Burman gearboxes. The cycle part was conventional, apart from an odd patented double front downtube Â– this frame could also take the 250 and 350cc Villiers. More complex and taking longer to make than the cycle part of earlier bikes, the frame of the MC and MCS owed its origin to a welders' strike. Working at premium rates, the welders demanded an increase in their basic pay, which was refused by the management, and a frame that needed no welding was developed.

This fine French classic bad a Swiss engine and an English gearbox in a frame designed to break a French welders' strike.