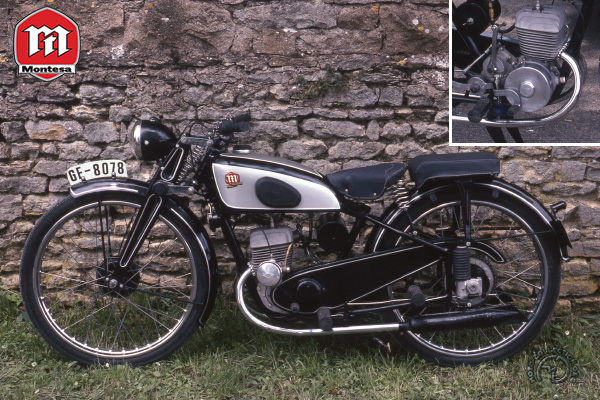 The leading Spanish 125 of the postwar era

The Spanish motorcycle industry was founded in the immediate postwar era. Twowheelers were vital to Spain, which was totally deprived of imported. products yet lacked indigenous means of transport. It was in this environment that Pedro Permanyer and Francisco Bulto created Montesa in 1944.

Good for Road and Track

Their first motorcycle appeared in 1945; it was a 98cc two-stroke with twin exhausts and three-speed gearbox inspired by the Motobecane B1. Successful commercially as well as on the racetrack, for at that period manufacturers raced the products on hand. At the end of 1945 Montesa unveiled a ladies' version of its 98cc model with an open frame and this most interesting 125cc, designed by Francisco Bulto.

Like the 100cc Montesa, the 125 was first seen in racing; it won the 1946 Spanish national championship and went on to acquire an international reputation with three placings in the 1948 Dutch Grand Prix. The Montesa company, based in Barcelona, expanded rapidly and had difficulty keeping up with demand. Improvements on the racing models were rapidly made to production machines. At the 1951 Barcelona Fair, Montesa unveiled the 125 D51, the marque's first model with a telescopic fork. It became a characteristic feature of Montesa, with an offset wheel spindle and fork tubes which descended well below the hub. With the D51, Monresa made its first steps in trials riding, with the marque winning a bronze medal in the 1951 ISDT held at Varese, Italy.

The first Montesa 125 developed into a 50 mph luxury sports mount with a color scheme recalling that of the Norton.