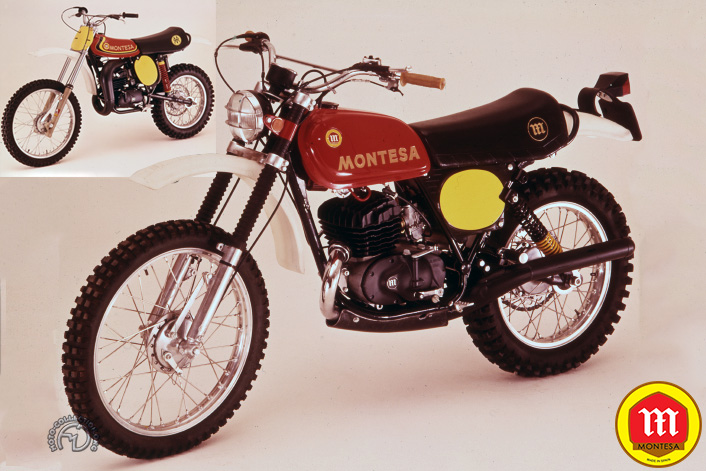 This little firm, founded in 1944 by Pedro Permanyer and Francisco X. Bulto, began brilliantly in speed events but by the end of the 1960s was specialized in off-road events. The King Scorpion 250, launched in 1970, marked its debut in enduro.

After enduro models like the King Scorpion, derived from trials machines and favoring handling and flexibility to the detriment of power, Montesa changed tactics for the 1975 season, with the new 125 and 250 Enduro models directly taken from motocross bikes.

The Spanish firm followed the general trend started by KTM, as competition in enduro became faster and more furious - "The ISDT is becoming an 1100-mile motocross," a rider remarked. Therefore, the Montesa 250 Enduro, introduced in late 1974, was derived from the Cappra motocross machine. But, despite appearances, Montesa was not simply content to add street-legal lighting and muffler equipment. The frame might have been similar in design, bur it had abandoned chromemolybdenum steel, and the rear dampers no longer had exterior gas cartridges - the fork was the same as in motocross. The engine was also a direct transplant, with its distinctive fin pattern and black finish. The main difference from the Cappra were the gear ratios, specially chosen for enduro. The main drawback was that the Enduro had an over-large exhaust system passing beneath the engine and reducing the ground clearance to 7.8 inches.

similarities between the two models.