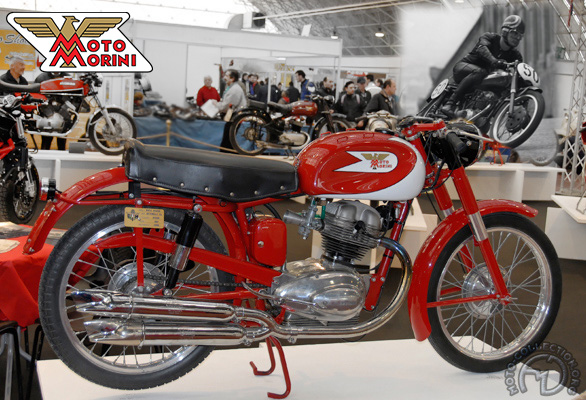 In the mid-1950s, il was quite possible to race on a shoestring budget. Competitors in the Italian Formula Junior series, which was restricted to catalogue "sport" models, favored the Morini Settebello, which offered unquestionable reliability, remarkable performance and great ease of maintenance at half the price of a single-cam MV designed for international racing.

The Settebello ("lucky seven") was a simple enough design: a pushrod four-stroke single devoid of sophisticated. techniques mounted in a conventional cradle frame. But what made the Settebello so very special was its superb finish and meticulous preparation.

It had been produced to celebrate works rider Emilio Mendogni's victory in the Italian Senior Championship on an ohc 175 Morini. By using a simple pushrod engine closely related to the production machines, Alfonso Morini ensured that the Settebello sold extremely well. The ultimate works racers, with their megaphone exhausts, were said to be good for 100 mph, while carefully prepared standard Settebelli had entirely creditable top speeds in the region of 90 mph. In 1963, after an outstanding nine-year career, the Settebello 175 sport was dropped from the catalogue, and only the 250 version was listed. However, the 175 was still available as a "client-competition" machine with such noteworthy improvements as a lowered frame, a different cylinder head and hub-center brakes.

This 1960 Settebello 175 has had its original seat and tank replaced by the more streamlined units of the 250; they would he standardized on the 175 in 1963.