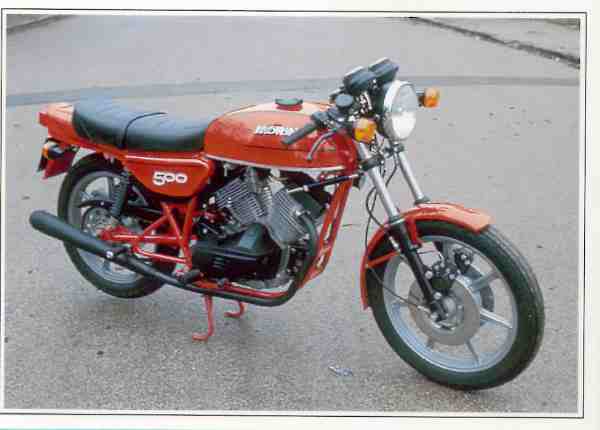 This little marque, which had become renowned for its singles, entered a new era in 1973, when it announced its revolutionary 350 twin. This unorthodox engine, designed by Franco Lambertini, the son of one of Morini's first engineers, and Dianni Marchesini, was an innovative concept that was both economical and efficient.

Available in both single- and twin-cylinder models from 125 to 500cc, it would allow Morini to survive until the little factory was finally taken over by Cagiva in 1987. Sensibly, Morini had abandoned all hope of creating a supersports bike in the interests of practicality.

simple V-twin proved an excellent solution. It was notable for its Heron-type combustion chambers - an unusual layout for a motorcycle though it had enjoyed considerable popularity in car engines. The two parallel overhead-valves were set in a flat cylinder head - which was particularly easy. to manufacture - with the combustion chamber formed in the pistontop itself. In 1975, Morini unveiled the 500, which was developed into the 500 Sport three years later. But the concept no longer held the lead in efficiency. The 1979 Sport failed to live up to its claimed top speed and its main advantage lay in its superb power-to-weight ratio allied to its roadholding qualities.

The Morini V-twin was a long -lived power unit, but by the time the 500 Sport came along, it was beginning to lose a little sparkle.