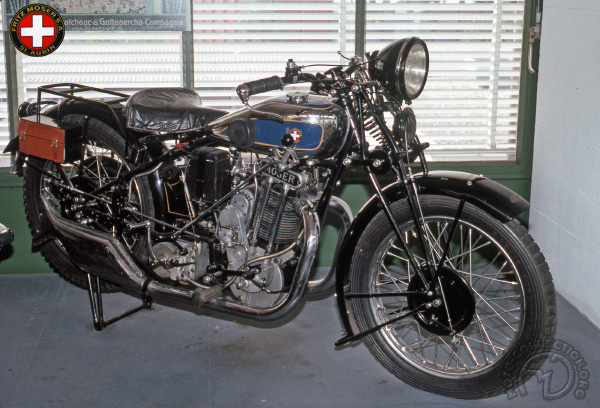 The Swiss motorcycle industry is best remembered for marques such as Motosacoche, Condor and Universal. Yet there were plenty of other manufacturers, among them three

marques based at Saint-Aubin in the canton of Neuchatel- Muller & Vogel, ZĂĽrcher and Moser. After a spell with ZĂĽrcher in 1900, Fritz Moser founded his own firm in 1902. He built bikes from 125 to 600cc, sold many engines in Italy and built automobiles in

Before long, Fritz Moser was specializing in small-capacity machines (125 and 175cc). In the early 1920s, his overhead-valve 125s took the first two places in the Swiss GP.

This masterpiece really established the firm, whose engines were made in France by Dollar, in England by Rex Acme, in Germany by Hercules and in Italy by a number of little firms such as FVL, Baudo, Lecce and MillerBalsamo. Fritz Moser also built complete bikes with displacements of 125, 175 and 250cc. He sold his business to Allegro in 1932, just as he had created a high-performance ohv 500 single. This ultimate Moser bike was also offered as a 600 (84x106mm), and its Burman box could have either a footselector or a hand-shift. The bike Â– which had sports ambitions - was also available with or without lights, though the price was the same in either case. Moser production ended in the mid-1930s.

Shown here in its touring version, the Moser 500 OHV Special was also available in a competition specification- without lights and with a seat pad replacing the luggage grid.