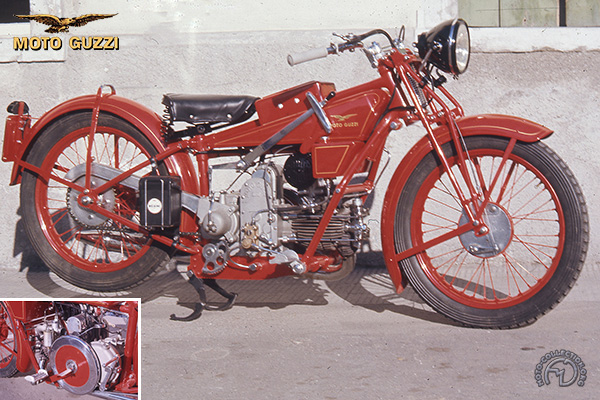 The single-cylinder bike that conquered Italy

"In 1920, Carlo Guzzi astounded the world by unveiling his first motorcycle, a horizontal single-cylinder 500 cc with a single overhead camshaft and four- valve head with twin spark plugs. It was, however, still a prototype, and when it came to series production the following year, costs demanded a simplified design. But that first production Moto Guzzi was still a success.

The 1923 Moto Guzzi 2 VT ("valvole in testa" or "valve in head") was the company's first racer with twin overhead valves. After 1928, it gained a swinging-fork rear suspension and remained in production until 1934.

In 1924, however - now certain of commercial success - Carlo Guzzi went back to his original concept and launched the C4V, with an overhead camshaft actuating quadruple valves. For a long time it was the world's fastest single- cylinder bike and won many competitions. Originally developing 22 hp at 5500 rpm, with a top speed of 93 mph, the last C 4Vs built in 1933 had a power output of 32 hp. A total of 486 were produced. Sticking to the original concept, Moto Guzzi continued to make horizontal singles until 1976, in a long line that stretched from racing bikes to utility models. Guzzi also built military models for the Italian Army, police bikes for the Carabinieri, and nearly indestructible three-wheeled light commercial bikes with the same powertrain.

Italy was a two-wheelersÂ’ paradise in 1927 That year, Moto Guzzi production totaled 79,710 vehicles, 52,673 of which were motorcycles.