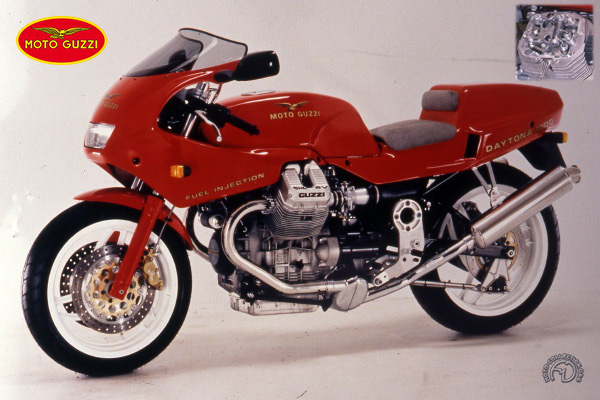 A fresh look at tradition

For over ten years - in other words, since the V50 - the renowned firm of Moto Guzzi has been in virtual limbo, though various prototypes have appeared from time to time to rekindle the hopes of the marque's fans. Typical is the 1000 Daytona, a worthy descendant of the famed V7 Sport and LeMans models. Developed out of the machines raced by various tuners in the "Battle of the Twins," the Daytona represents the biggest investment by Moto Guzzi for many years.

A Major First for Guzzi

Basically, if the engine is still recognizably derived from the overhead-valve 700cc V7 of 1967, the cylinder head has been drastically redesigned with, for the first time on a production Guzzi, two overhead camshafts and four valves per cylinder. The fuel injection and ignition-management systems are up-to-date, too.

The frame reaffirms the traditional philosophy that made the firm's reputation: The engine is suspended from a massive central backbone and has no supporting cradles. The transmission shaft is no longer housed within the rear suspension arm but is separate; a radius arm eliminates the hunting so often associated with this type of transmission. First shown as a prototype in 1990, the Daytona was scheduled to go on the market during 1992, priced at around $21 ,000.

Does the future health of this famous manufacturer depend on the Daytona? Whatever the outcome, the effort was fully justified.