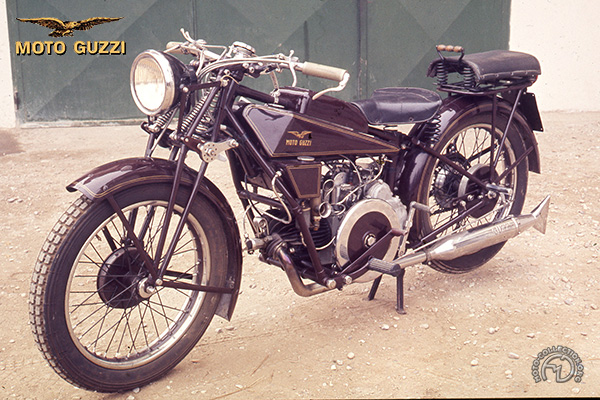 At the end of the First World War, Carlo Guzzi and his brother-in-arms Giorgio Parodi founded what would become the leading Italian marque. Its first model in 1921 was a highly original horizontal single. It was a layout to which Moto Guzzi was to remain faithful for 60 years and created a low-built, extremely stable motorcycle.

The first Sport version appeared in 1923, and was replaced in 1929 by the Sport 14 model which, if you believed the advertising, incorporated 30 improvements. These included the electrical equipment (separate magneto and dynamo) and the frame, which had been modernized with revised geometry, a new front fork, and a front drum brake (the first Sport only had a single rear brake!).

The reliability of its models caused Guzzi's sales to soar and in 1929 the marque became Italy's best-seller. The Mandello factory employed 500 workers. The Sport 14 alone was built at the rate of 50 units a week; a total of 4285 examples were sold during the model's two years of existence. These figures become even more astounding when you learn that only 50 examples of the first Guzzi of 1921 existed. Production of the various versions of the Moto Guzzi F-head 500cc - Sport, Sport 14 and 15 and types S and GTS with rear suspension - only stopped in 1940, when over 17,500 motorcycles had been sold.

Valves: side inlet and overhead exhaust

This extremely rare Sport 14 bas the garnet paintwork which supplanted the green finish of the first Moto Guzzis.