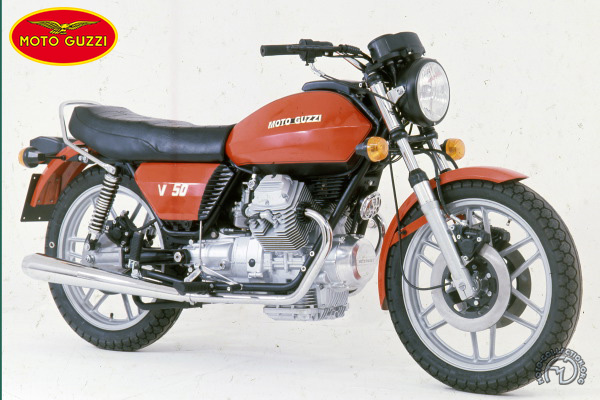 Introduced in 1977, the Moto Guzzi V5O and its "little sister," the V35, excited enthusiam

by their intelligent concept. At last the great Italian marque was bringing out a new model worthy of its tradition.

Evetything was effectively new about this extremely compact 500 which only took the transverse layout of its V-twin engine from the marque's bigger models. The main technical originality of the V5O was the unit construction of engine and transmission. The cast-aluminum swinging arm housed the shaft final drive and was fixed directly to the gearbox. The entire power train could be detached in a few minutes from the double cradle frame.

But Not Sporting Enough

Also new - though the layout has often been copied since - was the mounting of the rear brake on the same side as transmission, permitting more rapid overhaul and wheel removaL That great engineering wasn't enough to make the V50 a best-seller. It was relatively expensive compared with its Japanese rivals and the financial problems of the marque at that period hindered its distribution. It wasn't until the later developments - the V50-III and then the V65 650cc - before the model arrived at full maturity. And then, sadly, it was too late.

Light and easy to ride, the V50 did not acquire the necessary muscle until the arrival of the V50-III in 1981 .