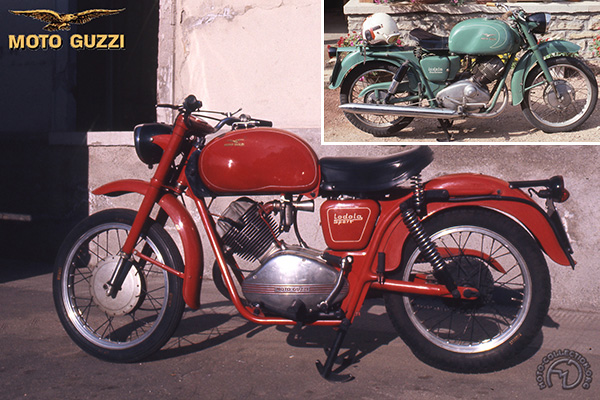 The Lodola of 1956 was the final model created by Carlo Guzzi, founder of the firm. It was also the first four-stroke Guzzi motorcycle to abandon the traditional horizontal cylinder that had been the "signature" of the marque since 1921. Guzzi had not completely abandoned the horizontal configuration, for the cylinder barrel of the Lodola was inclined at 45 degrees.

A Lark with a Hot Temper

The new bike was, like the majority of Guzzis, named for a bird. "Lodola" means "lark" in Italian. It was a funny kind of bird for behind its unassuming exterior lurked a fiery temperament. Technically, it was right up to date, and perfectly attuned to the

fashion for 175cc sports machines. Oddly, the 235cc Gran Turismo version, which appeared in 1959, abandoned the overhead camshaft for valves actuated by pushrods and rockers though the Regolarita version, which stacked up a brilliant string of success in enduro racing, always kept the overhead cam on official bikes and was built until 1966.

More Sporting Than It Looked

The unspectacular styling of the Lodola concealed a real sports bike.