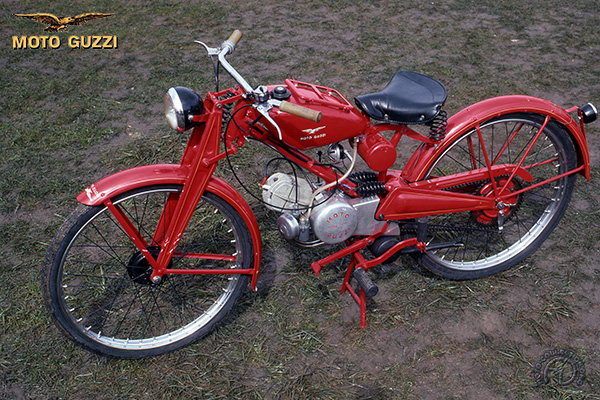 Italy entered the postwar period with one overriding need, low-cost transportation. After having studied a prototype four-stroke, Guzzi chose the economical two-stroke. In 1946, he launched this 65cc machine. It was an unbelievable success! Production was 50,000 in three years; a rally organized by the marque attracted 14,000 entrants.

A Selection of Technical Gadgets

The 65 was replaced by the Cardellino ("Goldfinch") which, in its first version, only represented a change of name accompanied by a few minor improvements. This most utilitarian of Guzzis didn't lack technical originality, boasting a thrilling selection of technical gadgets that gave the most possible the least cost. The simple concept of its frame relied on the genius of its designer to achieve an acceptable degree of rigidity.

The little bike was fully equipped and the undamped rear suspension was particularly interesting, with a pressed-steel swinging fork pushing against two springs located just behind the engine. The 65 took. to the race circuits, notching up an astounding number of successes, including 1000 km covered at a record average of 46.95 mph in 1947. There was no stopping the little "Guzzino," which the same year completed the Milan-Taranto rally at over 43 mph average. It was hitched to sidecars and even went from Milan to Oslo.

Simple, robust and economical, the "Guzzino" was a great success in postwar Italy. It was produced up to 1965, available in 64, 73 and 83cc