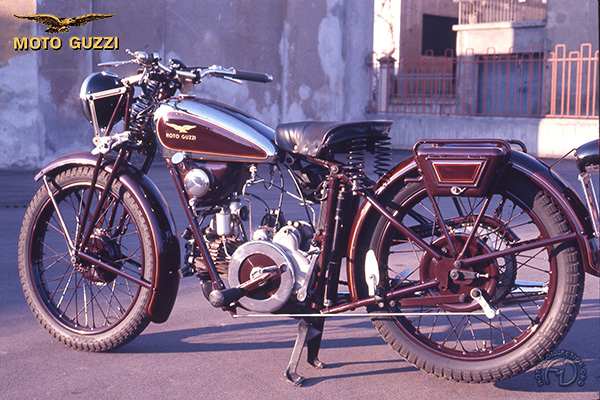 Working down from the top

Contrary to the practice of most marques, Moto Guzzi started from the top of its range with a 500cc horizontal single and it wasn't until 1932, eleven years after its first model, that the marque made anything as small as the P175.

It was no surprise that the little model followed the layout of its big siblings, with a horizontal unit-construction engine mounted in a rigid double cradle frame. Several thousand of the different versions of the "P" series were sold, making it one of the most profitable of the Mandello factory's products. It was a welcome source of revenue, after the early the 1930s which had been costly, with the firm's three-cylinder touring and racing models proving a ruinous venture.

The P175 was a sports bike that abandoned the firm's traditional opposed valves, in favor of totally enclosed overhead valves closed by hairpin springs. This little machine, with a big performance continued to evolve. A 238cc version was added in 1934, at the same time as a foot-change replaced the hand selector. The production tailed off into the PE, with rear swinging fork suspension, and the more sporting PES. The series P became the PL in 1937, adopting, for reasons of cost, a frame in pressed steel ("L" stood for "Lamiera" = "sheet metal"). In 1939 the new 247cc PE with a four-speed transmission fmally appeared; it later took the name of "Airone" ("heron") and remained in Moto Guzzi's catalog until 1957.