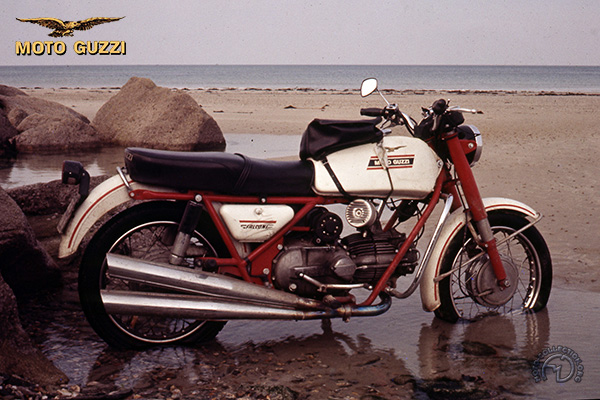 Moto Guzzi's famous Falcone, the company's most successful single, took over Ita ly in 1950. Although deleted from the catalogue in 1954, it remained a feature or the everyday landscape. The Italian police were appreciative of its ruggedness and the bottom-end torque that made it an excellent bike for urban patrol work. Demand from the military and the police forced Moto Guzzi to restart production in 1969. The Nuovo Falcone ("New Falcon'') had arrived.

All New under an Old Name

After a first series reserved for the uniformed services, Guzzi realized that the big single still had a place on the market and a civilian Version of the Nuovo Falcone appeared in 1971. The design had been revised. The engine gained an electric starter and the oil was no longer in a separate tank, but was housed in the sump. The frame had been

redesigned similar to the 750 V7 Sport.

Silence Is Golden- but Ugly

Guzzi. had equipped the Nuovo Falcone with an aggressive double muffler. It stuck out like a sore thumb but enabled the hike to meet increasingly strict noise regulations. In 1975 the Sahara version was introduced, painted sandy beige and equipped for long voyages with a pair of panniers and a fairing to protect the engine. But the new Falcones seemed like idle reminiscence and failed to please. It was a real shame, for in 1976 Yamaha unveiled the Yamaha XT 500, which created new interest in the big single.

The Nuovo Falcone was too heavy and slow to satisfy a market on the lookout for novelty.