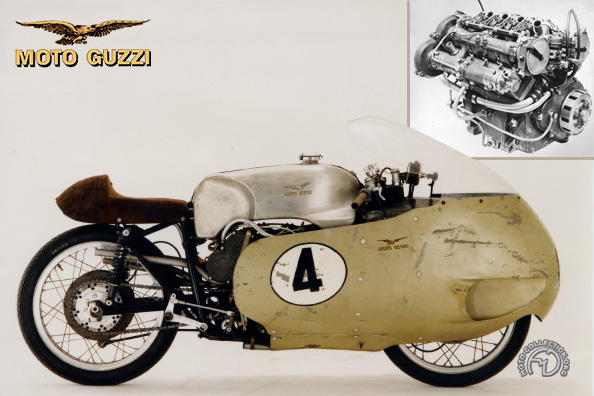 With such achievements as a four-valve single in the Twenties, a supercharged four cylinder in the Thirties, and pioneering work in aerodynamics, there's no question that Moto Guzzi has been one of the world's most creative manufacturers. But perhaps this V8 racer was its clear masterpiece.

Designed by the engineer Giulio Carcano (also famous for his racing motorboats) at the end of 1954, the Guzzi V8 was the fastest and most powerful of the postwar bikes. After two years' development it was at last ready to do battle with the opposition - which was fiercely competitive at the end of the Fifties - when Guzzi, Gilera and Mondial decided, at the end of 1957, to withdraw from the world championships.

The choice of a four-stroke V8 power unit was without parallel in motorcycle racing - it involved a degree of mechanical complexity that no other manufacturer had dared confront. Apart from the 1938 Galbusera two-stroke V8, the monstrous (and unique) Scripps-Booth "Bi-Autogo" (now preserved in the Henry Ford Museum in Michigan), and the aeroengined V8 recordbreaking bike built by pioneer American aircraft manufacturer Glenn Curtiss around 1910, it's difficult to think of another V8 motorcycle. The 90-degree Guzzi V8, with its transverse two-plane crankshaft and tiny, short-stroke pistons, was in a class of its own.

Hard times brought Guzzi's V8 to an end at the end of 1957. Its styling was typical ofthe periodÂ— aerodynamic but very vulnerable to side winds.