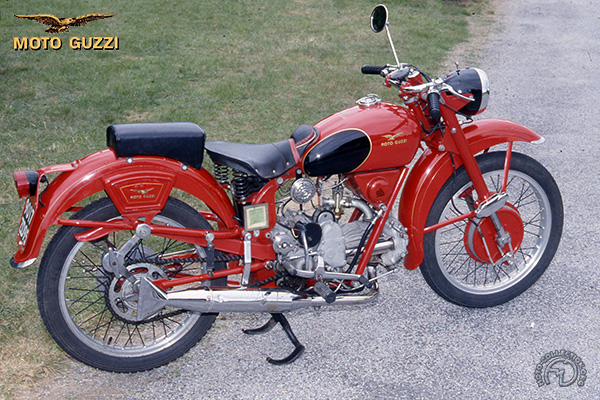 Over the period from 1939-1947, the Airone was Italy's most popular mid-range motorcycle. Actually, its career had really started earlier. Its four-speed gearbox and its name - which is Italian for "Heron" - developed from the P/PE series launched in 1932. Ornithology guided Moto Guzzi between 1938 and 1960, a period during which the company called all its new models after birds: "Alee" ("eagle"), "Albatros," "Galetto" ("rooster"), "Falcone" ("falcon"), "Cardellino" ("goldfinch").

Like the other Guzzi models, the Airone had a unit-constructed horizontal single-cylinder ohv engine, mounted in a highly evolved frame with front and rear suspension. Of composite pressed-steel/tubular construction, the frame at first had tubular girder forks. They were later made of pressed-steel and finally replaced by hydraulically damped telescopic forks of a type unique to Guzzi - the tubes ran in roller guides.

The rear suspension was compact and efficient: the triangular swing arm was pivoted at its apex and pulled against two horizontal springs mounted beneath the engine. Above the fork were friction shock absorbers operated by radius arms. There were only slight changes after 1948, when the first Sport variants made their appearance and an aluminum cylinder and head assembly was introduced.