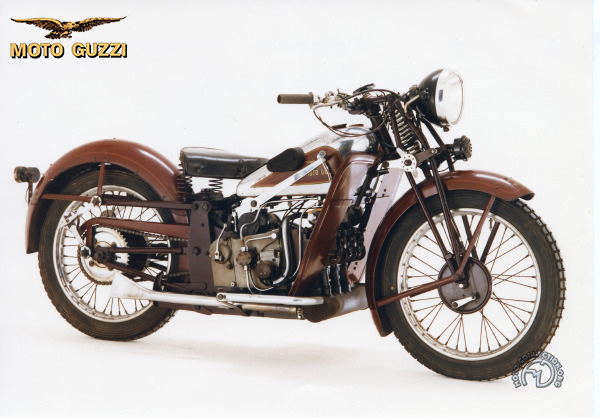 Sixty years ahead of its time!

Few marques - if any - can boast of a history as rich as that of Moto Guzzi. The great Italian company, famed for its horizontal singles, has tried just about every possible engine configuration, from twins V or parallel - to a fabulous V8.

From Four into Three

One of the most interesting developments - which sadly proved to be a dead-end - began in 1930 with a supercharged racing bike endowed with a remarkably compact transverse horizontal four-cylinder power unit. This extraordinary engine, the first Guzzi multi-cylinder, achieved 45 hp at 7800 rpm and 110 mph but never passed the prototype stage. However, two years later, its technology gave birth to a three-cylinder roadster whose concept still seems modern.

Though the three-cylinder engine is rarely used, principally on account of the cost of making the crankshaft, it is nevertheless ideally configured for the motorcycle. Its 120- degree firing interval gives it nearly perfect balance and - lighter and more compact than a four - it is better suited to transverse installation. The Guzzi went still further since - like modern engines - its width was little more than that of its cylinders. Of rare elegance, the "Tre" ("Three") was also innovative because of its bolted-up, two- piece frame, derived from that of the four and fitted with a remarkable swing arm rear suspension designed in 1928 by Carlo Guzzi himself.

Too far ahead of its time, the Guzzi Tre never passed the pre-production prototype stage and today the sole survivor is preserved in Moto Guzzi museum.