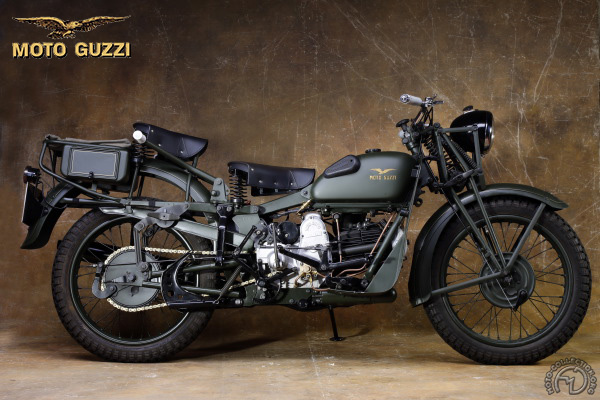 The super eagle has landed

As Italy's biggest manufacturer. Guzzi always held a priviledged position when it came to supplying the military. for whom it designed a number of motorbikes, sidecars and even an all-wheel-drive tricar for mountain roads.

The best-known series which Guzzi built for the army began in 1932 with the GT 17. This F-head 500 was followed in 1938 by the GT20, which, in keeping with the fashion then current at Guzzi of naming models after birds was called the Alce (Â«EagleÂ»). The famous model was built until 1945, by which time over 6100 had been produced. Even though it was robust and well-liked. the F-head engine had certainly run its course. In 1946, Guzzi introduced the Superalce; it had overhead-valves, which lifted the power

Guzti had turned standardization into an art form, because ever since its first 500 in 1921 it had retained the same engine layout and even the same bore and stroke of 88x82mm. Even better, the marque used the same basic engine for its military, touring and racing bikes. The Condor which packed some 28 muscular horses, scarcely differed from the Superalce, which was built until 1957, although. the Superalce would scarcely have won prizes for elegance since its shape was lost beneath a superabundance of equiprnenr: leg shields, toolboxes, assorted brackets; and even a pair of folding handlebars for the passenger.

Slightly different from the touring model, the frame of Alce and Superalce had a ground clearance of 7 inches.