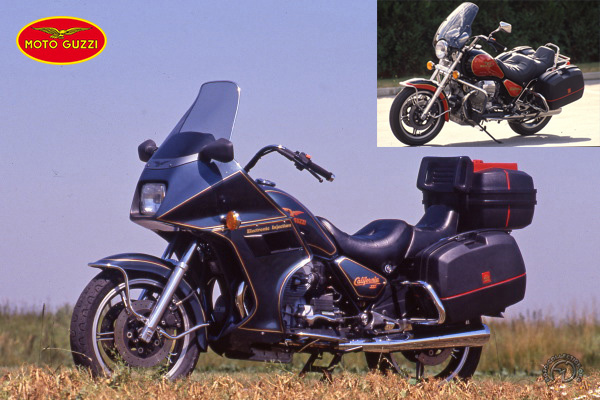 Italian with an American accent

During a crisis at the end of the 1980s, Moto Guzzi no longer had the financial capability to develop new power units, but the historic marque survived by wringing the last drops out of its famous V-twin engine which had first seen the light of day 22 years earlier.

The Americans had created the "Grand Tourer" class, with its cow-horn handlebars, side panniers and fairings, and Moto Guzzi's 1988 California III followed this fashion brilliantly, even though it was still a relatively small machine alongside such bikes as the Harley Classic or the Honda 1500 Gold Wing. In fact, it weighed nearly 270 lb less than the big Honda - and cost 40 percent less in the bargain' Though it lacked the overabundant equipment of these top model tourers, its elegance and standard of finish were no cause for shame.

With its spacious two-level dual-seat, the California III was not built for high speeds and rubber-burning standing quarters. Its transmission had a slow shift, and its 65 hp power output was no match for the competition. The antique design of its big V

twin power unit was revealed in its undamped periodic vibrations, though it would pick up cleanly in fifth from as low a speed as 1500 rpm, and carry its rider and passenger to the ends of the earth at a remarkably frugal 40 mpg (US) cruising between 75-95 mph.

Substantially restyled and respecified, the 1988 California III offered a new look at American-style Grand Touring, with the emphasis on elegance and economy.