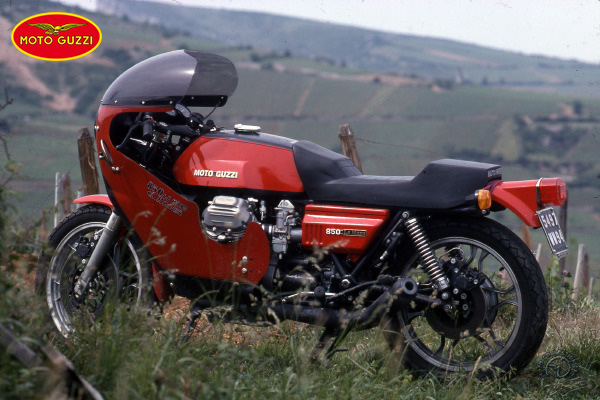 Originally designed as a Grand Tourer, as well as for use by the police, the Guzzi V7 quickly evolved into a slick sporting machine. After flirting with some speed records in 1969 with the developing tourer, Guzzi went full speed ahead into 1971 with the unveiling of its inaugural V7 Sport - 750 cubic centimeters cranked out 52 hp and pumped the cycle up to almost 125 mph.

Style of the Times

At the Milan Show in 1975, Moto Guzzi stunned everybody when it revealed an astonishing evolution of the V7 Sport, the 850 "Le Mans." The bike's style represented a merger of both traditional and modern influences without sacrificing Guzzi's mastery of motorcycle design. An Italian motorcycle in every sense of the word, the Le Mans was elegant from front to back, right down to its carefully laid-out instrumentation. And the bigger engine truly made the 850 a new bike. Ideally suited for sporting and touring, the 850 also found success in endurance races.

The Le Mans could cover a quarter-mile course in 13.8 seconds, ripping along under the power of its air-cooled cylinders and dual carburetors. Slowing down from 125 mph was no problem - the Le Mans' riders could count on the bikes innovative disc braking system to bring the 850 to a quick stop. After introducing the first big V in 1967, Moto Guzzi proved with the Le Mans that it could hold its position as one of Europe's premier motorcycle designers and builders.

Versatile and modern, a perfect sporting bike, the Guzzi 850 Le Mans could be converted to a competition endurance racer without major modifications.