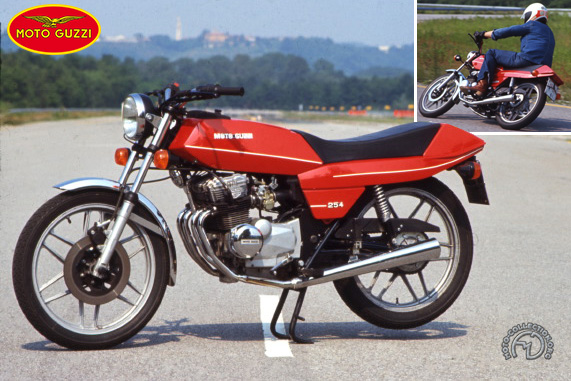 Since the late Sixties, the Argentinian industrialist Alejandro de Tomaso has acquired several of the great Italian car and bike companies, among them Maserati and Innocenti, as well as Benelli and Moto Guzzi. His great dream was for his motorbikes to beat the Japanese on their own ground, and from 1973 his group began to design and produce a range of spectacular multicylinders, ranging from a 750cc six down to this 250cc four.

Launched in 1975 and put on the market two years later, the Moto Guzzi "254" was the smallest production four-cylinder of its time. The bike had originally been intended as a

125, but the cost would have been prohibitive, so the 250 version was put into production under both the Benelli and Moto Guzzi names.

Aside from its physical dimensions, the engine was a Chinese copy of the Honda 500 Four, which had served as inspiration for the entire Benelli multicylinder range. But the

cycle components were of a unique construction. The engine was hung from a compact tubular frame, to which were attached a flexible plastic fuel tank and five semi-rigid ABS moldings that could quickly be replaced in case of accident. The speedometer and tachometer were mounted atop the tank. The 254 was great fun to ride, with its engine eagerly accelerating to 12,000 rpm. Some fancy clutchwork and five gears, however, were required to keep the spritely rocket under control.

The ingenious use of plastic moldings for fuel tank and bodywork made the 254 both light and easy to maintain (but not to restore!).