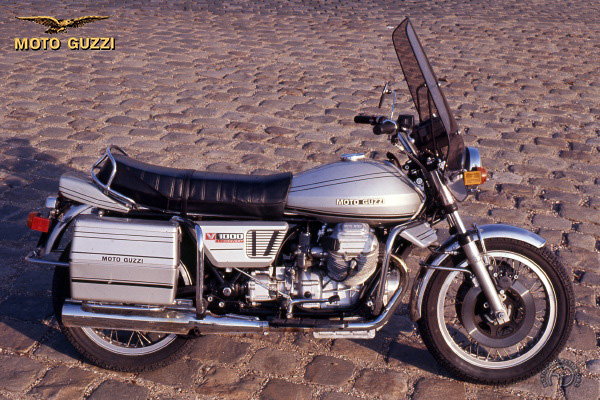 The unfulfilled dream of Lino Tonti

In the early 1970s, the motorcycle industry was trying to attract a more mature and sophisticated clientele. Automatic transmission seemed, to several manufacturers, like a good way to attract customers who had previously driven automobiles - or at least were unaccustomed to riding a motorbike. Lino Tonti of Guzzi was not slow to sense this trend, and the Convert was his wellconsidered response to it.

The name evoked the Sachs torque converter with which this machine, with its semi-automatique transmission, was fitted; otherwise, it was not different from existing models.

As on the similarly-equipped Honda, thetransmission incorporated two speeds controlled by a selector pedal on the left: a fairly low ratio for urban and mountain use and a higher ratio for highway riding. On the other hand, where Honda had a kick-starter, the Guzzi had no independent means of starting in case of an electrical breakdown. With its footboards, wide handlebars and windshield, the Convert should have been an ideal touring mount, particularly because of its coupled brakes controlled by the right foot, making relaxed riding even more reassuring. Sadly, the Guzzi only attracted critical acclaim. Like all the other automatic motorcycles - except the 400 Honda Â– the Guzzi had become heavy and unwieldy, quite the opposite of what novice motorcyclists

were seeking. It was discontinued.

The Moto Guzzi Convert was a bold attempt to make a viable motorbike with an automatic transmission, but it didn't sell well.