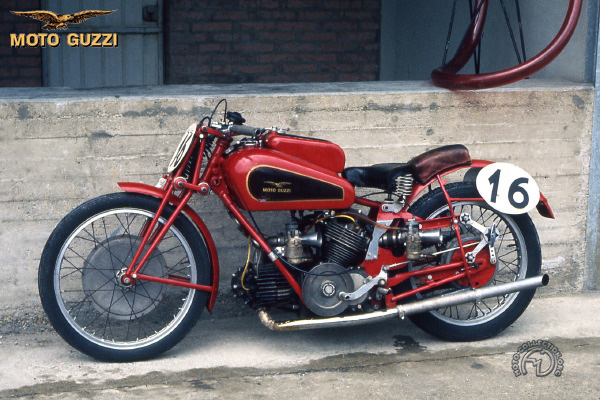 In June 1935, after a titanic struggle in the Isle of Man Senior Tourist Trophy, the 500cc Moto Guzzi ridden by Dublin-born Stanley Woods crossed the line four seconds ahead of the Norton of Jimmy Guthrie, making Woods the first rider in history to win both Senior and Junior TTs in the same year.

In its long histoty, Moto Guzzi has used just about every engine configuration: its first V twin appeared in 1933, replacing a four-valve single and a supercharged four-cylinder. But the "new" engine in fact consisted of two cylinders from its unbeatable 250cc single, mounted at 120 degrees on a common crankcase to allow maximum cooling of the rear cylinder. lt proved a winning formula: improved over the years, the 500cc V-twin was still being used in 1951.

For the 1935 TT Moto Guzzi fitted the "Bicilindrica" with a novel rear suspension using twin horizontal springs beneath the swinging fork; the setting of the friction dampers could be adjusted by Bowden cable from a lever on the handlebars while the bike was in motion. The 1935 ''Bicilindrica" developed an astounding 51 hp at 7500 rpm and could reach 118 mph. The performance of the postwar version was mitigated by the poor-quality 72-octane fuel which was all that could be obtained in those cash-strapped days.

As usual with Moto Guzzis, the flywheel of this 1948 Grand Prix bike is mounted externally; this macbine has the oil reservoirÂ·for its dry-sump lubrication atop the fuel tank.