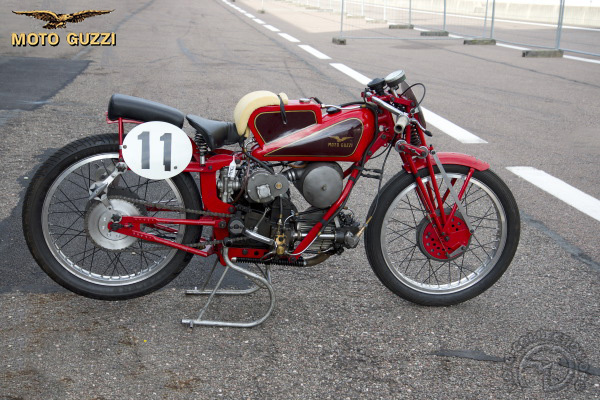 Prior to WWII, the fashion for superchargers on competition machines was strong. Guzzi could not be left off this technical bandwagon, and its racing 250 proved particularly suitable for a forced induction. In 1938, the 250 was fitted with a vane-type Cozette supercharger, driven by a train of pinions.

To lessen the effects of pumping caused by the constant up-and-down motion of the piston in the single-cylinder engine, a "buffer chamber" was fitted between supercharger and cylinder head to absorb the variations in pressure due to the blower.

Initially destined for record-breaking, the supercharged 250 was also raced in GPs in 1931. Its unfaired speed was not much over 118 mph, but despite that, it enjoyed a fair amount of success. If Omobono Tenni and Stanley Woods were forced to retire when they were leading the TT, the Guzzi had its revenge in the German GP, when Guglielmo Sandri and Nello Pagani outdistanced the supercharged DKWs. The high point of the season was the flying kilometer record achieved by Raffaele Alberti in October, at an average of 132.48 mph. In 1940, Alberti won his class in the Milan-Taranto event with an experimental fuel-injected version known as "Gerolamo." In 1952, this engine was used by Gino Cavanna to establish a new kilometer record- with a sidecar- of 137.47 mph.

Whether in its racing version or as a recordbreaker with extended wheelbase and rear wheel disc, the 250 Guzzi well demonstrates the technical excesses of the period prior to WWII.