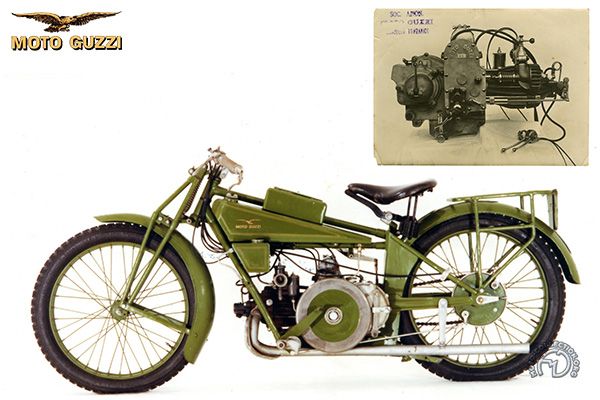 Fifty-five years on the road

During WWI, Carlo Guzzi imagined a bike that would be absolutely revolutionary at all speeds, powered by a horizontal unitconstructed single-cylinder four-stroke ohc engine with four valves and dual ignition. He built his dream motorcycle in 1920. Then,

hanks to the financial backing of his wartime companion Giorgio Parodi, he founded the Moto Guzzi firm and in 1921, launched this first production model.

Carlo Guzzi's aim was to produce a popular, practical and reliable motorcycle that would carry its riders in comfort without all the annoying little drawbacks that were common in motorcycles back then - drive belts that stretched and broke, manual lubrication, feeble rim brakes, unreliable clincher tires and so on. The list seemed endless.

Financial reasons and the limited technologies of the day didn't allow Guzzi to put all the revolutionary features of his prototype into series production. The first Moto Guzzis to reach the public were noticeably simplified. For instance, they had F-head engines but the overall design was the same, and the model was a great success. This 500 Normale was so well-conceived that Guzzi retained the F-head engine up to the S and GTS models of 1940, and the final 500 Falcone of 1975 still had the same bore and stroke and many features in common. This first version did not yet have the oil return pump, which first appeared in 1922, but it had dual ignition, available as an option until1925.

With its external "bacon slicer" flywheel, the original production Moto Guzzi horizontal single of 1921 set a style that would remain typical of the marque for over 50 years.