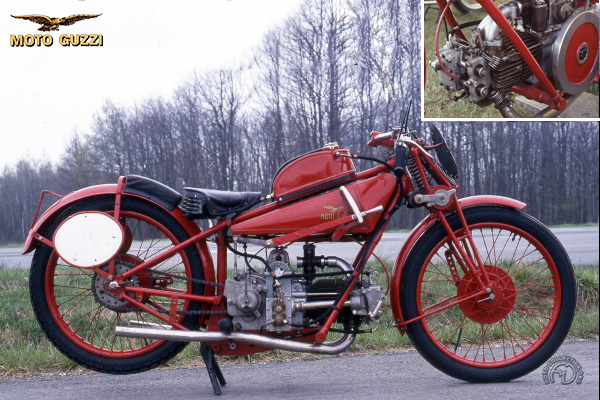 The European racing championship first took place in 1924, and Guzzi took the opportunity to develop its first GP bike. The year before, the marque had launched its first racing bike, the ohv C2V with -even at that early date - a unit-constructed engine with oversquare dimensions and dry-sump lubrication.

However, the C4V GP bike made its predecessor look old-fashioned. Its combination of an overhead-cam and quadruple valves was very rare - even though the original Guzzi prototype had used this layout as early as 1919.

The miracle was that this futuristic design proved efficient and reliable. Guido Mentesti (Guzzi) won the first 500cc European Championship, resolved by a single race, at Monza in 1924, beating the Peugeot twin that had won at Monza in 1923, Nuvolari's Norton, the Sunbeam and the Sarolea. Visioli finished second and Ghersi fifth, completing Guzzi's triumph in the 250-mile race, won at over 80 mph. Ghersi won the German GP three weeks later, and the C4V took several world records during the winter, including 100 km at 92.6 mph. It also won the Circuit of Lario three times. Available to privateers from 1926, the C4V, in its final dual-carburetor version, won the 1932 Milan-Naples race, ridden by Carlo Fumagalli. It only went out of production in 1933. Despite its 4V-TT and 4V-SS derivatives, it appeared outmoded by then with its handshifted three-speed gearbox and rigid rear end, but even so, 486 examples of the C4V had been built.

The C4V became the first 500cc Champion of Europe in 1924. This 1926 example was the last to be delivered with a bronze cylinder bead.