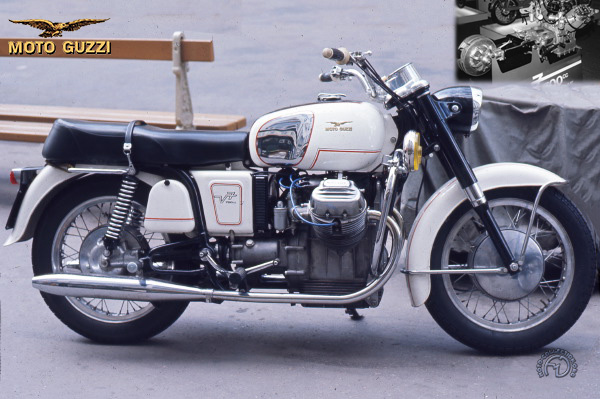 For many years the image of Moto Guzzi, like that of BMW with its flat-twins, was identified with a very particular type of engine, the four-stroke horizontal single. But no matter how strong such a link may be, a marque also has to evolve to keep its image going, and that means recognizing the right moment to strike off in a new direction.

This is just what Moto Guzzi did in 1967 with its first transverse V-twin, which quickly established a new image for the firm from Mandella del Lario. Just like the CB 750 Honda unveiled at the end of 1968, the first Guzzi V7 was a revolution, marking one of the most significant turning points in motorcycling history.

The resurgent Italian industry had the opportunity at that time to reconquer the world market, but unfortunately it lacked the commercial thrust and reacted too late to customers' demands for more sporty bikes aimed towards leisure rather than grand touring. By acting more quickly, the Japanese would come to dominate Europe and crush all trace of resistance by the reborn European marques. Lino Tonti, an engineer renowned for many other designs, had started work on the Guzzi V7 project in the Fifties. Based on a modern, rational power unit, still in use today and intended for automotive as well as two-wheeled applications, this outstanding Grand Touring bike was unveiled at the end of 1965 and went on sale in 1967.