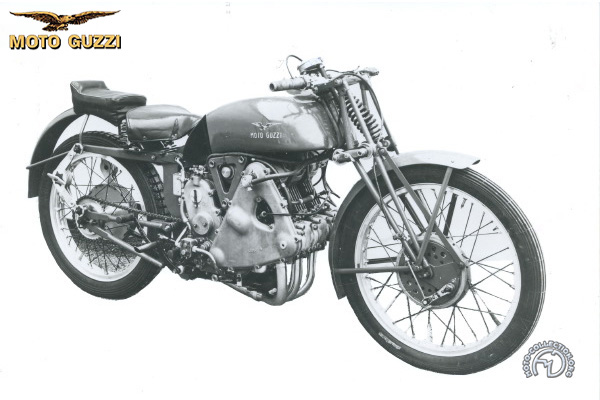 One, two, three, four and even eight cylinders: Moto Guzzi tried everything, and this threecylinder bike was one of its best efforts. Yet the ban on superchargers after WWII brought its career - which was limited to a single race in 1940- to an end. The three-cylinder, which was a personal project of Carlo Guzzi, debuted in 1939, when most European factories were investigating supercharged multi-cylinders.

With nothing in common with the touring three-cylinder model of 1932, whose cylinders were virtually horizontal, this competition bike was one of the most innovative of all time and -like his first design of 1921 Ā–demonstrated the immense creativity of Carlo Guzzi.

It broke with all his normal concepts: The unitconstructed engine was as compact as it was light, thanks to the intensive use of magnesium and other special light alloys. A massive casing covered the chain driving the twin overheadcamshafts, while the capacious cover for the clutch was mounted on the end of the crankshaft (an unusual configuration for Guzzi). The Cozette vane-type supercharger and the carburetor were mounted above the gearbox, which - another original feature - had five speeds. The cycle part was also unorthodox: The engine, which contributed to frame rigidity, was hung from a single upper beam, and the swing arm rear suspension was controlled by a horizontal spring beneath the engine.

Just one incomplete example of this superbike survives - in the Moto Guzzi museum.