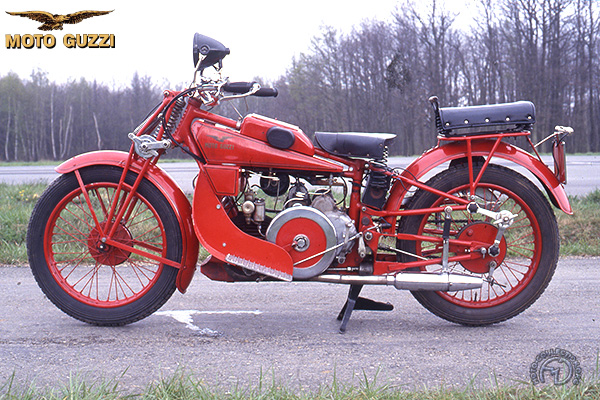 By the late 1920s, Moto Guzzi had become one of the truly great marques. The motorcycle became a trusty and reliable machine. Carlo Guzzi (joint founder of the firm in 1921, along with Giorgio Parodi) wanted to take a major step fotward by making it a more comfortable mode of transport.

Rear suspension had long been available on motorcycles - both in Europe and the US - but it was still rare and often had an adverse effect on roadholding. Guzzi created a reliable and effective installation, which it lost no time in fitting to its racing machines.

In 1927, Giuseppe Guzzi (brother of Carlo) designed an "elastic" frame. The lower frame of the "Sport" was replaced with a pressedsteel assembly. At the rear, a triangulated fork, pivoting on the frame, had twin extension pieces compressing two pairs of forward facing coil springs in the box section of the frame under the cylinder. The suspension was so well-designed that Guzzi used it until 1967. The GT, which used a single-cylinder engine taken from the Sport, bad a friction damped girder front fork that benefited from dual compensator springs, in addition to the central spring. just 78 examples of this model were built between 1928 and 1930, after Giuseppe Guzzi had demonstrated the capabilities of his design by riding a GT to the Polar Circle in Norway. This feat earned the model its popular name "Norge."

Comfortable, efficient, rugged and affordable yet extremely well-equipped - the GT was nevertheless a genuine lightweight.