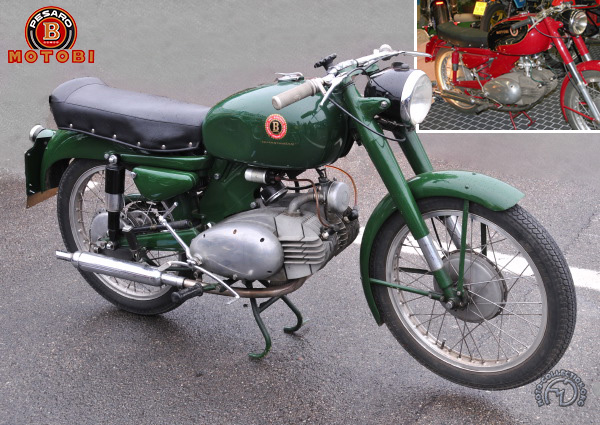 In 1950, Giuseppe Benelli resigned from the motorcycle company that carried his name, and that he ran with his brothers. He quit so that he could start - in the same Adriatic town of Pesaro - a new marque called simply "B" ("Bi" in Italian) soon to be better known as "Motobi." It was distinguished by the unusual layout of its bikes: horizontal

engines - initially two-strokes, then fourstrokes - suspended from a pressed-steel

Motobi production began in 1950 with a little 98cc two-stroke with a flywheel magneto. The B98 was joined in 1951 by a 125. Then, in 1952, a very elegant 200cc two-stroke twin appeared whose aesthetics created a genuine revolution in the world of motorcycling. For the first time, the engine was incorporated into the overall design, with cylinders and crankcase joined into an egg shape. The B200 was equally original technically, with a rotary disk inlet valve (on the first versions only) formed by the central flywheel of the crankshaft..

With the addition of a fourth speed to the gearbox in 1953, the B200 assumed the curious name of "Spring Lasting,'' which baffled English-speaking journalists because it was totally meaningless! Further development occurred in 1955 when this ultimate "Gran Sport" 250cc version and another bike with twin carburetors, destined for endurance racing, appeared. A "Sport Speciale" won its class in the celebrated Milan-Tarento rally in 1955. Motobi rejoined the Benelli group in 1962, but the production of its models and their derivatives continued until the end of the Sixties

Designed by one of the most brilliant Italian engineers of the Fifties the Motobi twin was one ofthe most striking motorcycles of its day.